When We Began - Judy Corry

Synopsis: Cassie's staying at her best friend's house for the week and plotting who should be her summer boyfriend. Liam's had a longtime crush on his sister's best friend and he has no intention of letting her entertain thoughts of other boys this summer. Considering he's likely at the bottom of her list of eligible guys, he's got his work cut out for him. But, he's got a few tricks up his sleeve and he's not afraid to use them.

Review: Though it's meant to be a prequel, it's a legit start to this cute YA series. Cassie and Liam have good chemistry. It's fun to watch them dance around their feelings for each other. Liam is a good guy that has a lot of ground to make up after years of tormenting Cassie. He's the perfect guy to help her see her worth. Cassie's got some things to learn about herself and it's good to see her become confident and empowered as she also finds her HEA. A good clean read.

My Not So Wicked Boss - Jennifer Peel

Synopsis: When single-mom Aspen is passed over for a promotion, she's willing to entertain other options. Nannying an adorable little brit may not be what she was trained for, but when he comes with her favorite handsome best-selling author uncle, who's she to argue? Miles is sure he needs a nanny for his orphaned nephew, he's not so sure he needs a relationship. It seems, he's about to get both when he offers Aspen a nannying job and a home for her and her daughter.

Review: The title is a definitely a misnomer. There's nothing wicked about Miles. He's an awesome guy who just doesn't think he's got it in him to commit to a woman. Aspen's got her own issues, but, really, they're destined for each other. They're well matched, have palpable chemistry, are rational and able to think through their hangups and figure it out. Little Henry and Chloe are excellent sidekicks for this power couple. Friends who feature in previous books round out the cast of characters and make for a great read. There's some mild cussing and inuendo but it's overall a pretty clean read.

Synopsis: Lyra is less than impressed when her little town makes popular Spence's blog's Top Ten Tacky Tiny Town's list for the fourth year in a row. She knows there's no way he's even been there or he'd know better. But when she calls him out on it, his rabid followers attack her bakery and livelihood, it starts to get personal. Spence's blog may be popular, but his finances aren't stellar. When he gets threatened with Lyra's lawsuit, he sees little hope except to go to her town and try to make things right so she'll call it off. He's not expecting to find a cute little baker with a handful of awesome friends and one of the quaintest towns imaginable. Lyra may be ready for a fight, but it might not be the one she was expecting when her heart skips a beat or two everytime Spence walks in the door.

Review: Bria Quinlan is always so fun to read. Her heroines are quirky, and fallible, and so very likeable. Her heroes manage to make you sigh almost as soon as you meet them. It's never a stretch to imagine why they fall for each other. The chemistry is real and wonderful. The situations fun and ridiculous and delightful. Lyra has great girl friends who push her to go outside of her comfort zone while her guy friends have her back. They're an awesome bunch and you're just really glad you got to meet them. Clean but not entirely chaste.

Synopsis: Jace has recently moved back to Ridgewater with his family (you'll remember his twin Logan from book 5). His longtime crush Alyssa is still around but now dating his best friend. Not one to interfere, he's resigned to just being friends with her. When a bet with her boyfriend gives him license to try to win her over, he's happy to find she's not at all averse to exploring a relationship with him. Until, of course, the boyfriend decides he's not into losing a bet or a girlfriend.

Review: Though a YA series, these have not always been light fluffy reads. One could easily believe this group of friends were young adults tackling college rather than high school. Alyssa and Jace deal with some heavy loyalty and trust issues as they work out their story. Jace, like his brother, is an exceptional hero for a teen guy. Alyssa's torn about how to think and act when faced with some tricky situations. Given that they're teens, I'd love to see them interact with their parents for advice a little, but their friends are pretty rational, thoughtful confidants. This book includes a full cast of characters from previous ones, which is kind of fun. While not essential to the plot, reading book 5 just before this one, wouldn't be a bad idea. They play out in real time with each other so you get an interesting third perspective that would be all the more enjoyable with Logan and Raven's story fresh in your mind. Some heavy kissing but otherwise a clean, chaste read.

Gorgeous and the Geek - Rachel John

Synopsis: Willa is launching a new reality show and she's required to fake an off-camera romance with one of the judges of the show. She's fine with that as long as she can pick him. It's a pretty safe bet to choose her co-star from her current show. Doug is steady and a good friend and will agree to the scheme. He's not sure this is the best idea but is so taken with Willa that he'd be crazy not to take the opportunity to spend more time with her even if he knows it isn't going anywhere. Only it does. It follows them all over the country as the show takes them on the road and gives them way more time together than either of them is ready for.

Review: Doug is awesome. He's just so grounded and honest with himself. He knows he's getting in over his head, but he still takes the bait. Willa is a good, strong heroine and you can easily see why Doug is mesmerized by her. They have good chemistry and their story is natural and satisfying. It's a great addition to the series. A quick, clean, fun read.

Now Then and Always - Melissa Tagg

Synopsis: When the owner of the Bed and Breakfast Mara's been living, doesn't return from vacation, Mara starts to worry. Finding a foreclosure notice doesn't help the situation. With help from the town, she secures financing to secure the mortgage and start renovating the old home. When Marshall shows up one stormy night, she's not sure what to think. They're two people with a whole of lot secrets, a mystery to solve, and a house to renovate. Falling for each other is not on their lists.

Review: Part mystery, part romance, this off-shoot of the Walker Family series, is a good start to Tagg's newest series. Mara and Marshall are nice people who have a lot of healing to do. It's satisfying to see them working together to get themselves in a good place. The romance is sweet and the chemistry just right. The mystery has enough twists and turns to keep things interesting. A cast of new friends and ties to Maple Valley (from the Walker Family series) promise a great series to follow. Nice clean read. Strong faith elements.

Synospsis: Joanna Thorne is happily widowed and has no future plans to change her situation. She has a comfortable fortune and takes no pleasure in fending off fortune hunters. And so she finds herself looking forward to enjoying her eccentric friend's house party in her old neighbourhood. Lord Tyndale is a confirmed batchelor and determined to keep his niece from being wooed by a ne'er-do-well with an eye on her inheritance. And he finds himself at the same house party playing watchdog. When Mrs. Thorne discovers his plight, she is more than happy to lend her expertise in the matter. She,of course, has no intentions of falling for him and he, of course, has no plans to fall for her. It's the perfect arrangement. So they think.

Review: Joanna, despite her unfortunate marriage, has managed to come out on the right side of things and is an optimistic, confident heroine. Lord Tyndale is a worthy hero with a confident, strong exterior and a soft middle nobody knew existed. They have good chemistry and it's enjoyable to be party to their conversation. Despite his misgivings, he's smart enough to pursue his feelings and she's just weak enough to consider hers. Regencies are a tricky genre given the high bar set by Heyer, but Pennington does a nice job of it in her own way. A good clean read. 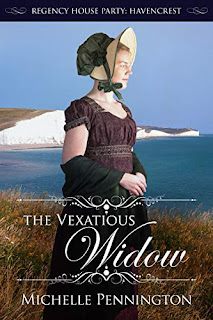